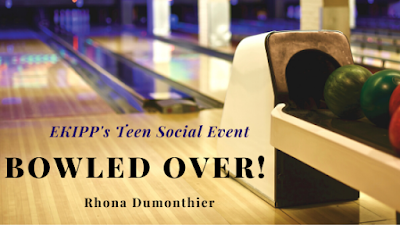 EKIPP held its first “Tweens and Teens” event in October at the Beaugrenelle Bowling Alley. Both kids and parents had a fun time and want to go back there soon! The parents lurked in the background chatting - providing minimal assistance - while the teens played two matches, in a focused yet relaxed manner, making use of the bumpers when necessary. The more seasoned players showed great solidarity with the less experienced ones, giving them top tips.

Here’s what the kids had to say about it:

Chloé: “It was my second time bowling and I liked it. It was hard to throw the ball. It was fun to meet new people!”
Charles: “It was awesome. I had a great time.”
Henry: “It was fun meeting new people and bowling at the same time.”
Saskia: “C’était trop bien d’être tous ensemble. Je n’ai pas été la meilleure ! Promis je m’améliore pour la prochaine fois.”
Charlotte: “It was fantastic. I got a strike!”

We’ll be organizing regular outings for the collège and lycée age group, with younger and older
siblings welcome. So far, we’ve had some great suggestions for activities (thanks Alicia and Sophie!), including: a car tour to see the Christmas lights on the Champs Elysées (if a couple of parents are willing to chauffeur) followed by pizza at a restaurant; ice skating followed by hot cocoa and crepes; watching a movie; taking a cookery lesson; an escape game at the Opéra Garnier; and taking part in a percussion workshop.

If you have ideas for an outing you think your teen would enjoy or you’d like to help organize one, or if you just want to reach out, drop me a line at EKIPP. Come and join us!


Our next event will be on Saturday 23rd November. We’ll post details on the EKIPP Facebook page nearer the time. If you’re not on Facebook, don’t hesitate to get in touch at the above address.